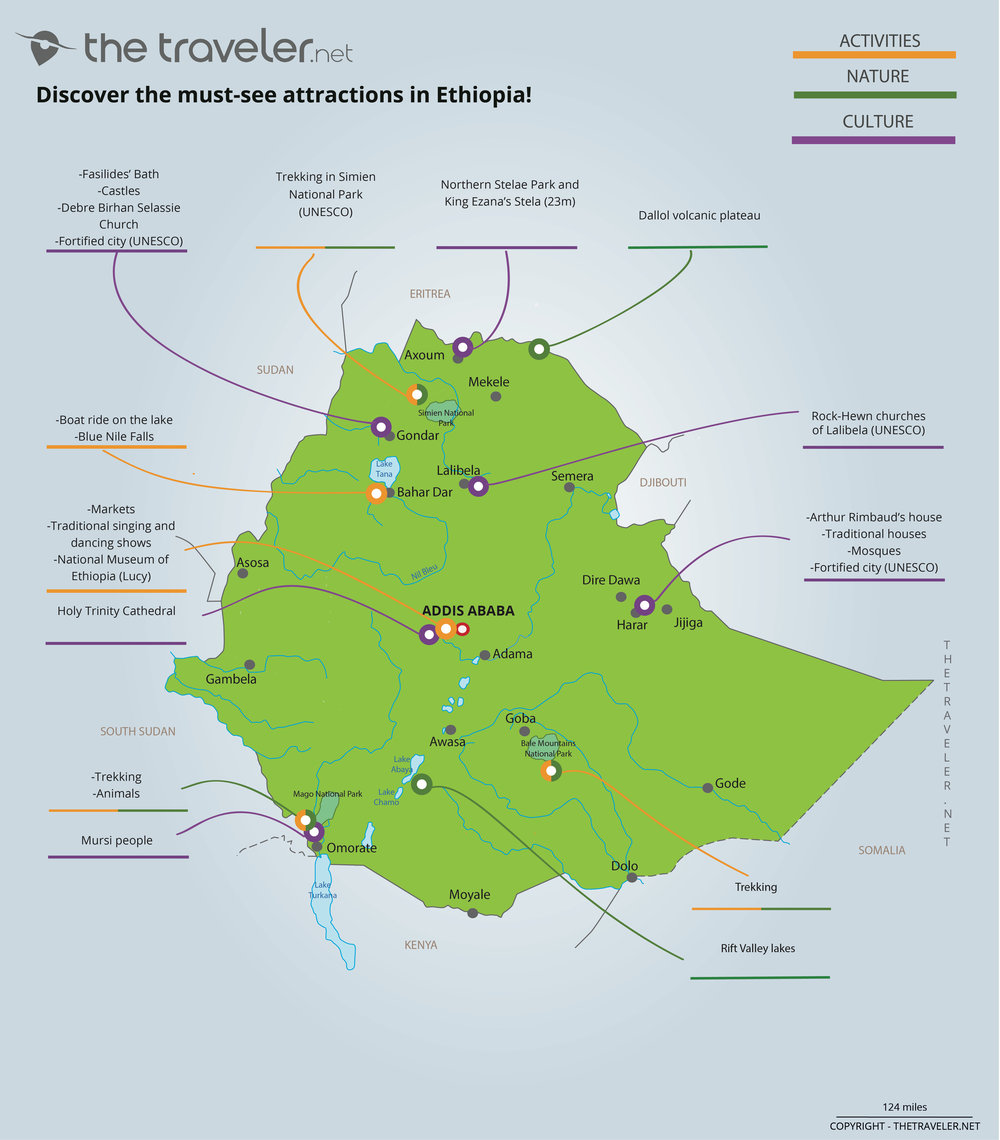 Welcome to Ethiopia- the oldest independent nation in Africa who has entered in to its 3rd Millennium is a land of stunning natural beauty covering an area twice as that of Kenya, France or Texas. Our country holds a rich culture and geographical feature that can easily captivate visitors with the warm and spontaneous welcoming smile that comes from its people.

With a moderate climate that Ethiopia is gifted, visitors can perfectly discover the country in which ever month of the year they planned to visit. For much of the year, the country has warm and pleasant climate in low lying areas and cool and bracing breath in the highlands. There are 2 principal season – rainy season from June to Mid September (although the sun still shines on most days) and dry season for the rest of the months.

Its attractions are world renowned and the development of the country as the foremost tourist destination in North east Africa has opened up Ethiopia to a new generation of Tourists to whom the visit of the land of queen of Sheba, the source of the Blue Nile, the cradle of man kind, as well as the lowest place on earth (Danakil depression) was previously just a dream.

Ethiopia's history as an organized and independent polity dates back to about 100 BC with the kingdom at Axum in the northern regional state of Tigray where by the kingdom emerges at about the beginning of the Christian era – 4th century A.D. the greatest power of the kingdom lasted from 4th – 6th century and underwent prolonged decline from eight to 12th century mainly due to the rise of Islam.

When Axum collapsed in 8th century, power shifted to the south and as early as the mid seventh century, the old capital at Axum had been abandoned and serves only as a religious center and place of coronation for a succession of kings who traced their lineage to Axum . By then, Axumite cultural, political and religious influence had been established south of Tigray in Agew district such as Lasta, wag, Angot and eventually, Amhara.

In 1137 A.D, a new dynasty came to power in the Christian highlands known as Zagwe dynasty where the kings of the dynasty are responsible for the construction of the 11 rock hewn churches of Lalibela which is unofficially considered as the 8th wonder of the world.

Beginning of the 13th century up to 15th century was the era of the treat of Muslim on the Christian kingdom until Emperor Gelawdios who defeated the Muslim forces and killed Gragn Ahmed (Muslim force leader).

In the 16th century of emperor Fasiladas era, Ethiopia's history was dominated by regional nobility. This is the era where the castles in Gonder have been built.

By the late 18th century, although powerless emperors and the Ethiopian orthodox (Coptic) church provided an element of continuity, real power was in the hands of provincial nobles from the highlands of Tigray, Oromo and Amhara who fought for the control of the throne. In 1880, Yohannes the 4th from Tigray region successfully fended off Egyptians, Italians and Dervishes. Minelik of Shoa (Successor of Yohannes the 4th) presides over the first stage of Ethiopia's modernization; Haileselassie (the last Solomonic dynasty king) turned Ethiopia in to centralized autocracy.

The last Solomonic dynasty king finally overthrown by the Derg communist leader in 1974 which in turn overthrown by the coalition of the Ethiopian people's Revolutionary Democratic Front (EPRDF) on May 1991 who are currently in power since then.

Ethiopia is a land of rugged mountains (whereby about 25 of them are above 4000 meters above sea level), broad savannah, lakes, and rivers. The rift valley which stretches from Mozambique all the way to Syria covers 5000 kilometers. Part of the rift valley which is found in Ethiopia creates remarkable volcanic lakes with its famous collection of birdlife, great escarpments, and stunning vistas. The Blue Nile falls (Locally known as Tis Isat) is ranked as one of the greatest natural spectacles in Africa.

Birdlife and indigenous animals from Walia Ibex to the wild ass roam free just as nature intended. After the rainy season, Ethiopia is a land decked with natural flowers and other native plants than most countries in Africa .

With over 80 languages and 200 dialects, the cultures of Ethiopian communities are prominent in their lifestyle. With tradition going back to the era of Axum and strong religious settings, celebrations and festivals play an important role in the daily life of the community.

In every region, you will discover local festivals and ceremonies where you will always be welcomed as an honorable guest.

Ethiopia, with a surface area of nearly 1.2 million square kilometers is the 7th largest country in Africa . It is located in the horn of Africa which is largely a high plateau with an elevation ranging from 110 meters below sea level in the Dallol depression of Afar to mountain peaks of 4543 meters above sea level in the Semien Mountains . The Great Rift Valley which stretches from Mozambique through Ethiopia all the way to Syria separates the western and the eastern highlands of Ethiopia and these highlands gradually descends to the lowland areas in the east, west and south of the country. Much of the country consists of high plateau and mountain ranges, which are dissected by numerous streams and rivers.

Kiremt (summer) – June, July and August are the summer season where we have heavy rain falls

Bega (winter) – December, January and February are the dry seasons with frost in the morning especially in January.

Belg (autumn) – March, April and May are the autumn seasons with occasional showers

* May is the hottest month in Ethiopia.

The Ethiopian calendar is much more similar to the Egyptian Coptic calendar having a year consisting of 13 months with 365 days and 366 days in a leap year. It is much influenced by the Ethiopian orthodox Tewahedo church, which follows its ancient calendar rules and beliefs. Our calendar is 7 years and 8 months behind the Gregorian and Eastern Orthodox Church calendar. That is the reason why we say “come to Ethiopia and be seven years younger"

The Ethiopian time is 3 hours ahead of GMT (Greenwich mean time) and is equally divided in to day and night, each consisting of 12 hours from sunrise to sunset and vice versa.