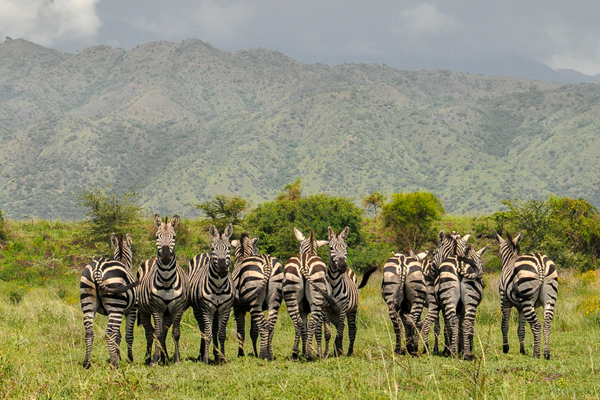 It was established in 1974, located to the east of Arba Minch, Park elevations range between 1108 and 1650 meters above sea level.The Park Protects the Nechisar “White Grass" Plains as well as the two lakes and the mountainous 'Bridge of God' dividing the lakes. There is a rich habitat density here, from acacia scrub to open grasslands, and there are 70 mammal and around 340 bird species that can be found here. There are also 15 endemic butterflies, and 8 endemic dragonflies which can be seen on the lakeshores. The park is beautiful and unusual, largely to the two lakes.

Wildlife: in the park include Plains Zebra, Grant's Gazelle, Dik-dik, and the Greater Kudu as well as one of the last three populations of the endangered Swayne's Hartebeest, endemic to Ethiopia. A stretch of the northwest shore of Lake Chamo is known as Crocodile Market, where hundreds of Crocodiles gather to sun themselves. The park also has populations of bushbuck, bush pig, Anubis baboon, velvet monkeys, black-backed jackal and Burchell's zebra.

Birds: Nechisar National Park is considered an important habitat for bird populations particularly those migrating. It has a noted population of kingfishers, storks, pelicans, flamingos and eagles. Other birds include Falco naumanni and Circus macrourus, which are fairly common on passage, while small numbers of Phoenicopterus minor have been reported on Lakes Chamo and Abaya. Species typical of bush land habitats include Phoeniculus somaliensis, Lanius dorsalis and Cisticola bodessa and the open plains support three species that are very unknown elsewhere in Ethiopia: an isolated population of Mirafra albicauda, the endemic Caprimulgus solalaand the rare C. stellatus. The south-western corner of Lake Abaya supports one of only two Ethiopian populations of Myrmecocichla albifrons. Other species of note include Accipiter ovampensis, Aviceda cuculoides, Gypaetus barbatus, Macheiramphus alcinus, Chelictinia riocourii, Francolinus levaillantii, & Podica senegalensis.