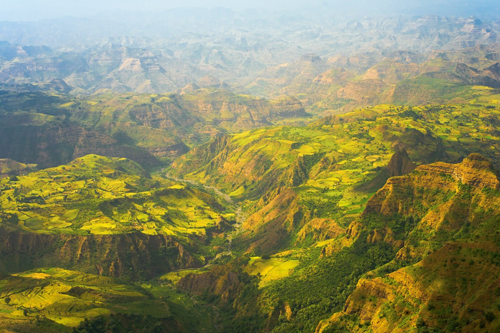 The Simien Mountain is one of the major highlands of Africa, rising to the highest point in Ethiopia, Ras Dejen (4543m), which is the fourth highest peak in the continent. Although Simien is in Africa and not too far from the equator, snow and ice appear on the highest points and night temperatures often fall below zero. The national park has three general botanical regions. The higher lands are mountain grasslands with fescue grasses as well as heathers, splendid Red Hot Pokers and Giant Lobelia.Ethiopia's best for wildlife, and resident within its boundaries are three of Ethiopia's endemic large mammals; the gelada baboon"bleeding heart on its chest",Ethiopian wolf and Walia ibex. The baboons are the most common of the three, and Walia Ibex is limited at camp site of Chennek. Ethiopian wolf is rare here but probable to be seen at Bale Mountain National Park. Over 50 species of birds have been reported in the Simien Mountains.