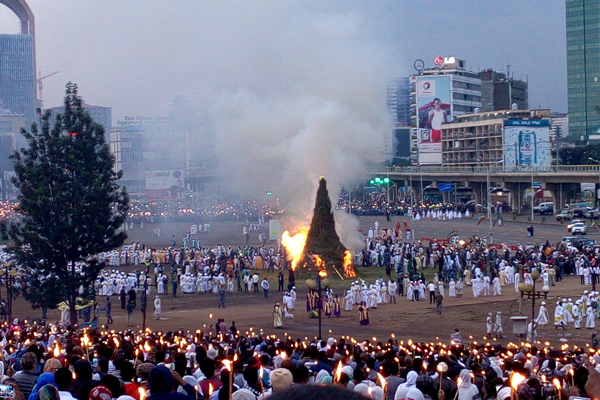 The True Cross is the name for physical remnants traditionally believed to be from the cross upon which Jesus was crucified. According to a number of early writers, the Empress Helena, (250-330 AD) mother of Constantine, the first Christian Emperor of Rome, at a date after 312 AD when Christianity was legalized throughout the Empire, travelled to the Holy Land, founding churches and establishing relief agencies for the poor. It was at this time that she discovered the hiding place of three crosses used at the crucifixion of Jesus and the two thieves that were executed with him. By a miracle it was revealed which of the three was the True Cross. Many churches (including Ethiopian Orthodox Church) possess fragmentary remains which are by tradition alleged to be those of the True Cross.

Meskal, meaning Cross in Amharic version, is one of the most important festivals in Ethiopia. Almost all Ethiopian Christian people celebrate the legendary event; “The Finding of the True Cross". It has a long history and was widely believed that first celebrated in AD 326.

The finding of the True Cross is celebrates in Ethiopia on every 27September .The celebration of Meskel assures the presence of the True Cross at mountain of Gishen Mariam monastery and also commemorates the events carried out by Empress Helena.

In the central highlands, the festival begins on Meskal eve by planting a green tree in town squares and village marketplaces. Everyone brings a pole topped with the beautiful yellow Meskal daisies (dry tall plant), which are abundant in Ethiopia at the end of the rains, placed to form a towering pyramid which is then set alight.

In Addis, large crowds gather in Meskel square near the Church of Saint Estifanos. A colorful procession gathers around the huge pyramid and the torch bearers set it alight. Feasting, drinking and dancing continue until dawn. When the central pole of the pyramid falls down, marking the climax of the event. The next day people return to the fire to make the sign of the cross in the remaining-ashes.

In the southern lands of the Oromo, Gurage, Kambata, Hadiya, Welayta and Gamo people, the festival is the most important event of the year and lasts for at least a week!

Mariam Zion/Hidar Zion/- Celebration of Saint Mary of Axum
One of the most fascinating and advanced legendary (may be real history) of Ethiopia is The Ark (lost) of the covenant of Axum. It is widely believed that the Ark is currently being held in the Church of Saint Mary of Zion, guarded by a monk known as the “Keeper of the Ark," who claims to have it in his possession. According to the Axum Christian community, they acquired the Ark during the reign of Solomon, when his son MenelikI (Ibin Hakim), whose mother was the Queen of Sheba, stole the Ark after a visit to Jerusalem. Axum Zion (Hidar Zion) is associated with the presence of the Ark of the Covenant in Axum. This church is the first to be built in Ethiopia. This festival is attended by tens of thousands of people from all over the World during 27-31November every year, making it one of the most joyous annual pilgrimages in Axum, the “sacred city of the Ethiopians."