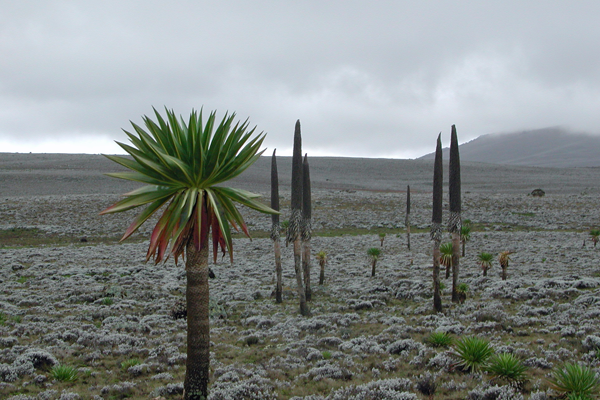 Bale Mountains National Park, established in 1970 is situated at about 400 kilometers from Addis Ababa. It is a magnificent high altitude (average elevation of over 4000 meters) plateau with numerous dramatic volcano plugs, tiny seasonal alpine lakes and cascading mountain streams. It stretches over an area of 2,400 square kilometers. Here are the largest Afro-alpine moorlands in the world. The dynamic of this ecosystem extends far beyond Ethiopia and is responsible for environmental changes and climatic conditions in Somalia and East Africa. As it is a place of endemism, the Bale mountains National Park inhabits endemic mammals such as mountain Nyala, Red fox and Menelik's Bush-buck. Moreover it is the shelter of Ethiopia's seven of 28 endemic birds. Formed by the Wabi River as it changes its course in the distant past and carved out a new channel through limestone foothills, the Sof Omar systems is an extraordinary natural phenomenon of breathtaking beauty. The cave which is now an important Islamic Shrine was named after the saintly Sheikh Sof Omar who took refuge here many centuries ago. The cave has a religious history that predates the arrival of the Muslims in Bale – a history calculated in thousands of years.Sofomar can be visited with Bale Mountains National Park Trip.