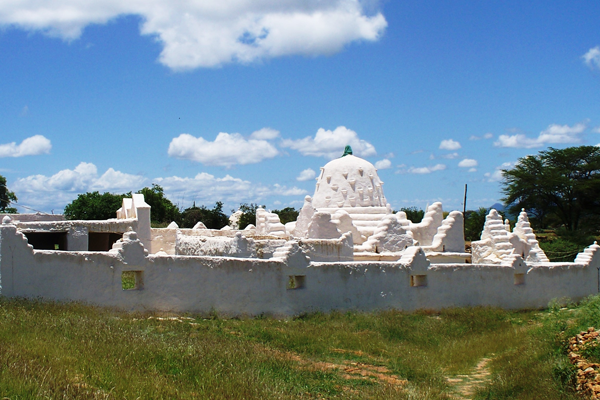 13 centuries ago, a Muslim Sheikh from the Hadramut (a district on the south coast of Arabia, bounded west by Yemen, eat by Oman and North by the Dahna desert), is believed to have landed on the Indian Ocean shoreline and followed the great river, the Wabi Shebelle, from its mouth to its headwaters. Here he settled and preached Islam and performed many miracles. He died in the Bale Mountains. His tomb became a shrine, and the shrine became a village named Sheik Hussein after his death. Sheikh Hussein's tomb is in a large white sepulcher topped by a red-blue dome. The scene at the sepulcher is dramatic & so religious: pilgrims kiss the walls of the tomb, crying, prostrating themselves and unburdening themselves of their problems. The experience is entirely cathartic. It has continued to be the destination of approximately 50,000 pilgrims twice a year during the Muslim months of Hajj and Rabi` al-Awwal. Most Pilgrimages come from Ethiopia's remote villages after an arduous journey to pray at the shrine of Sheikh Hussein. Some will travel by donkey or mule, but most will walk on barefoot – for up to 6 weeks or more to reach this sacred place. During 700 years, since the Sheikh's death, the pilgrimages have evolved into a mixture of Saint Cult and ancient ritual. By tradition, the departure of the pilgrims from their remote villages is governed by the waxing and waning of the moon.